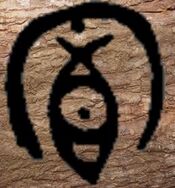 The Folk o' the Woodsie — commonly called Pagans, and a term they've been known to call themselves (Thief names them this more as a race, not an impersonal or disparaging slur), represent the human faction aligned with the forces of nature and chaos in the Thief world. They are primitive humans and beasts who promote nature and chaos at the expense of technological and environmentally-destructive progress. The shamans, warriors and humanoid beast members of the Pagan peoples pray to the Trickster, whom they most often call the Woodsie Lord, an ancient god of nature and chaos. The Hierarchy of Pagan society like the Hammerites structure, sees the god the Trickster at the top, followed by special powerful entities such as Viktoria, subsequently followed by the elite caste of shamans such as Dyan, then lesser shaman and finally warriors and commoners.

As nature lovers who worship the Woodsie Lord deity, and who prefer to live simple lives in the deep forests outside The City, the Pagans shun technology, living in harmony with the natural world, as well as the superhuman creatures that are the minions of the Woodsie Lord. They despise the ordinary people of the City, and are completely inimical to the Order of the Hammer and the splinter group, the Mechanists. The Pagans speak a corrupted version of the common language, often adding a "sie" to the end of several words (i.e. "Good" becomes "Goodsie".)

They believe in the life-and-death cycle to the degree that they are glad, and sometimes eager, to feed the plants and trees with the dead. At times, they will feed their plants with the blood of the living. They have been known to take great joy in killing their enemies and letting the flora consume the corpses. They believe in blood sacrifice. At times they are completely peaceful, sympathetic, and show no signs of blood-lust.

The Pagan deity, the Woodsie Lord—called "The Trickster" by his enemies--and the facts surrounding his war against the Hammerites' and their technology, are central to the plot of Thief: The Dark Project.

When Garrett went Into the Pagan Sanctuary, Garrett comments of "Pagans preparing for war". The warrior class within the Pagan society is new to Thief: Deadly Shadows, since Pagans typically task the Trickster's beasts with their dirty-work. The beast population Garrett encounters in Deadly Shadows is limited to a considerably small group of Rat Beasts, seeing that prior, he had killed The Trickster and sealed the portal from The Maw of Chaos, then later Viktoria was killed by Mechanist robots. With the number of beasts dwindling, the Pagans had to rely on themselves for combat.

The Pagans in Thief speak in a broken, English pidgin. Words are often ended in 's' or 'ie'. The vocabulary is based on nature; their songs, poems and sayings revolving around trees and leaves.

Indicatives, in any tense, are replaced with 'bes' ("Are you there?" thus becomes "Bes you there?"), except with 'was', 'will', and occasionally when speaking in third person singular where 'am' is used in place of 'is'.[1] 'He' is often, but not always, replaced with 'him' and 'them' is typically used in place of 'the' when applied to a common noun, much like the German 'der' and 'das'. Because of the latter, 'thems' is substituted for 'them' and 'they'.

Pagans have also developed their own slang. 'Woodsies' is a mild oath, "sapped" is their term for killed, "cityhead" for civilized people, "hammerhead" for the Hammerites, "sneaksie" for thieves, and "manfool" for non-believers. Beasts will sometimes refer to humans as "manflesh".

Thief: The Dark Project and Thief Gold have relatively few Pagan orators, those being limited to Viktoria and Constantine, who often speak fluent English, and the Ape Beasts, which are only present in the last three missions. More are encountered in Thief II: The Metal Age with the sudden influx of Pagan villagers. Of these only Larkspur appears to speak proper English, possibly through his dealings with outsiders and/or his association with Viktoria.[2] But it is in Thief: Deadly Shadows, that the pidgin comes out in full force.

In foreign language versions of the Thief series, the Pagans do not always speak in their 's' stressed pidgin. The Russian version uses the equivalents to "manfool, hammerhead etc." They don't use an equivalent to their 'bes' verb as in Russian there's no need for auxiliary verb at all. The French version has no changes from normal language, except with a poetric or naïve voice tone, but no 'bes' are spoken. In German, they speak with diminutive words in a deranged childish manner. Constantine and Viktoria are atmospheric but normal. In Polish, the stressing of the 's' is used with participle suffixes ("wszy", "łszy") and proper neologisms while translating some words ("woodsie", "manfool" etc.).[3]

Only once is this term used, in an assumptive guess regarding Viktoria, by the Warden Ramirez, who does not know Viktoria's nature, but only that she deals in herbals. Ramirez uses the term in his dossier.[4] In this instance, it is a reference to Viktoria only. Fanon has suggested this is the true name of the Pagans, but nowhere in all of the canon Thief Lexicon does the words 'Order of the Vine' ever appear again. To use the word "Order" in the title is to strongly suggest in the Thief idiom that he is not associating her directly with the Chaos-loving Pagans. It should be noted, however, that later the pagans have what appears to be a fairy defined Hierarchy, which presents a form of order. They are not referred as an order, however.

It should also be noted that it is said that Viktoria has connections to the Order but is not affiliated with them. There is no known link between the Order of the Vine and the Pagans except this comment. Other rare references to Viktoria seam to show that people haven't been able to gain much information about her and hinted that some references may be incorrect.

For a similar situation, see Order of the Gear.