Order of the Hammer 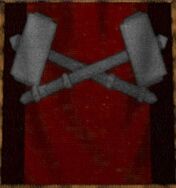 Also known as
The Hammerites, The Hammerite Order
Entity of Worship
The Builder
Symbol(s)
the Hammer, occasionally a Cross
Allies
City Watch, Garrett (at the end of TDP and possibly during TDS
Enemies
Pagans, Thieves, The Trickster, Mechanists, Garrett (until the end of TDP, possibly in TDS)
First Introduced
Thief: The Dark Project 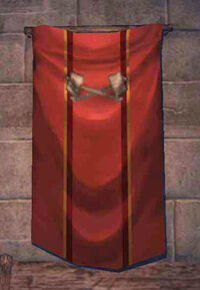 The Hammerites are a most industrious group, acting as construction contractors, working factories, and providing other sorts of technology for the City. However, they seem to have restrictions to technological progress, and regard the inventions of the Mechanists as heretical.

Years before the City Watch became a large organized police force, The Barons Police and The Hammerites kept The City in order (The head of the Barons Police was also a Sheriff). A letter between Ramirez and Commissioner deNavan suggests that the old watch sent their prisoners to Cragscleft Prison.[1] The Hammers had more of a position of street law enforcement. When Artemus caught young Garrett trying to snatch his purse, he pleads with Artemus not to turn him over to the Hammerites.[2]

The Order has lost a great deal of influence due to the current Baron's less than enthusiastic support of them and the paralyzing schism which drastically cut their numbers. This slackening of authority spurred on the development of the City Watch, which took over most of the Hammerite's law enforcing. Even after the fall of Karras, the Watch would maintain control of the law enforcing, though the Hammers would routinely patrol areas of their influence. 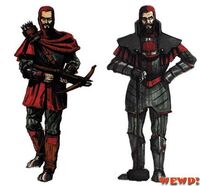 The Order is conducted by a High Priest, who mainly resides in the Hammer Temple. He has supreme jurisdiction and keenly observes the implementation of the Builder's will. He has no access restrictions to any Hammer facility and every person lower in the hierarchy answers to him. The Temple Priests or Master Forgers are one level below the High Priest. They have more limited authority, but are still required to observe the Order's members and goals. Next are the Temple Guards, Hammer Warriors and Craftsmen. They form the main body of the order. They are all generally adept with the weapons or tools and are keen followers of the Builder's code. Last in the chain of command are the novices who have very limited rights, can't talk while on temple grounds and must prove themselves to the Order by their skills and dedication.

In foreign language versions of the Thief series, the Hammerites do not always speak in an archaic version of that language, such as in the Hungarian language where no real archaic version exists. Although the Russian version of the game speaks a true older form of Russian, in the French translation the Hammerites speak français soutenu, which is a more "high class" version of French rather than common, or vulgaire, French. In the German translation of the game, Hammerites do indeed speak an archaic form of German, however, the form is commonly understood due to its popularity in German historical films. In the Polish translation, the spoken language of the Hammerites is a mixture of older Polish dialects, however, the Mechanists speak a more modern, scientific translation. [3].