This article relates to the magical "glyph" symbols, for the ancient pictograms, see Hieroglyph. 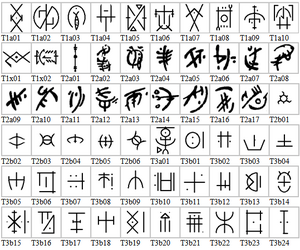 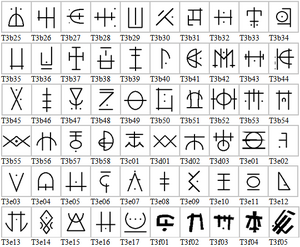 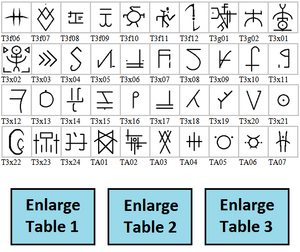 The Glyphs are the mysterious spells and symbols that the Keepers use. The Pagans have also been known to make use of glyphs, but only remote evidence suggests any Hammerite use of the glyphs.[Fact Check]

The functions of the glyphs are numerous. Their exact purpose is hard to define; their origins and ways are entirely unexplained.

Glyphs are different from magical spells in that they are, to some extent, sentient, and have unknown purposes. They can transform themselves (in warning or with harmful intent). They can be drawn on paper with a pen, or simply "drawn" into the air or onto any surface with a wave of the hand or finger. Gamall apparently did not need to draw them: her glyph-weapon simply appeared in her hand, and she caused a Door Glyph to appear on a wall without drawing it.

It is unknown how glyphs are controlled, if they are indeed controlled at all, or can be. For example, all Door Glyphs appear the same, yet they do not lead to the same place. Some similarities can be discerned between certain glyphs, such as a possible warning sign (T3b55) and the Trigger Glyph (T1x01).

The Glyphs in Dark Project

There are numerous glyphs presented in Thief: The Dark Project, but only the "Trigger-Glyph" and The Trickster's mark have significance.

The trigger is found in Constantine's mansion. It only activates when Garrett steps into its range (a long range, but rather limited sideways), whereupon it raises from the surface of the stone, flips horizontally, and descends back, causing three magic missiles to be projected from the opposite wall.

The Trickster's mark is commonplace. It first appears in the intro, along with several other (then unexplained) glyphs, many of which obtain some function or meaning in Thief: Deadly Shadows.

The Glyphs in Metal Age

In Thief II: The Metal Age the only function of glyphs is prophetic usage. They are prophecies that are read by the Interpreter (at this time, Caduca). They appear to interpret themselves into a language resembling Latin, and are translated by the Translator (at this time, Gamall). For more, see: T2 CS05. The glyphs here seem to glow 'alive' under Caduca's fingers, like glyphs in Deadly Shadows, but they are written in a different "font"; while the glyphs in TDS are usually straighter 'stick-like' symbols, the glyphs in T2 have more emphasis on curves.

The Glyphs in Deadly Shadows

Glyphs take a central role in the plot of Thief: Deadly Shadows, and much more about them is revealed in this game. A number of the glyphs seen in The Dark Project's intro are given functions here, new glyphs are named and created, and the glyphs are revealed to be sentient.

At this point, glyphs begin to misbehave, changing shape and sometimes causing injuries to the scribes who write them.

It is noteworthy that the desktop icon of Deadly Shadows also depicts the Door Glyph.