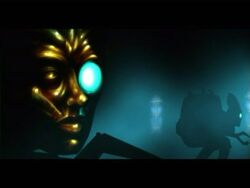 The Builder's Children were robotic creations of Mechanist technology, forged from iron to serve as workers and warriors. Not to be confused with either Masked Servants, Metal Watchers or Turrets, the Builder's Children can move about freely and are completely inorganic.

All of the Builder's Children are notable for being incredibly resistant to most damage, including initial immunity to Broadhead Arrows and sword strikes, but each possesses a vent on their back which leads to a furnace, their power source. It is this furnace that is their Achilles' heel: 2 Water Arrows fired into it will cause both a large Child and the Spider Bots found in Soulforge Cathedral to shut down immediately (and relatively quietly). A single arrow is sufficient to shut down the smaller Worker Bots.

All of the Builder's Children can also be shut down by 9 strikes from the Blackjack, though this is both loud and frequently dangerous. A Gas Arrow fired into or near the furnace can also shut them down, but this can be wasteful of resources. Likewise for a few Fire Arrows, and are disabled using a single mine.

An alternative strategy to combat the large Children is to take advantage of its line of sight and right-arm cannon. While they have extremely high accuracy, they fire if there is a direct line of sight with its face rather than cannon. As such, it is possible (although somewhat risky) to attract the attention of a Child, and take a sharp right corner around a wall. If the Child also corners, its face will see you but its cannon will still be behind the wall, so when firing the bomb will simply detonate on the child. Two self-inflicted explosions are enough to disable a large Child.

After a Child is shut down, it stands immobile and serves as a corpse that cannot be moved. 8 normal sword strikes will break the body apart into a large core section which can be carried and is capable of breaking glass if thrown, and various small pieces that remain behind for a short while afterwards, similar to blood from living opponents, save that it cannot be washed away. It also bears mentioning that breaking apart the body in this fashion is also rather loud, and may attract unwanted attention.