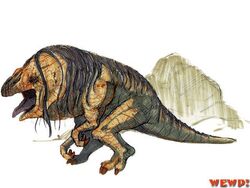 Burricks are huge, bipedal lizards, with a form vaguely resembling a cross between a Tyrannosaurus Rex and a Carboniferous amphibian, but with the head of an iguana, fit to scale, and without any crest or dewlap. They have hair like a horse's mane, but it lays flat, and appears matted and oily. They are loathed for their destructive burrowing and injurious belchings. They are popularly hunted and shot at, and some nobles' homes have mounted Burrick-head trophies. They can be lulled into complacency by the soothing musical tones, such as that of the magical Horn of Quintus.[1]

Burricks are burrowing animals, and can create labyrinthine tunnel systems much like ants, yet even boring straight through solid rock. Because no known material is impregnable to them, they frequently cause serious structural damage to nearby buildings and walls.[2] Their tunnel systems consist of a series of perfectly straight octagonal tunnels, merged at the ends, sometimes opening into a natural cave or huge conical Burrick den. It is unclear where waste rock and other material is stored; a few pieces of rubble by the first tunnel in the Bonehoard is the only vestige of this.

It is not known exactly what Burricks eat. They are not scavengers, as they apparently have difficulty digesting carrion, but are known to eat live animals.[3] In their extensive excavations, it's not out of the question that they consume whatever lives in the soil they clear away, possibly spiders or glowing mushrooms. Whatever it is Burricks consume they are able to produce from it a unique substance, which they use as their primary defense: a plume of visible, horizontally spreading, noxious green gas which they can belch forth up to a distance yet unmeasured.

Burricks almost always travel in small packs, usually in groups of about a half dozen, but if undisturbed by humans, they can form colonies numbering in the dozens, such as in the Bonehoard. They appear also to be somewhat emotional creatures similar to dogs, whimpering when injured, and howling mournfully upon finding a fellow burrick dead. Burricks have an advanced system of maintenance and housecleaning, evident by the stability and tidiness of their tunnels and living spaces. Four burricks have been found dead in one chamber of the Bonehoard in various stages of decay, which may be an indication of either quarantine or a primitive tomb. To an extent, they can also be tamed and kept as pets by those with adequate facilities, such as Ramirez.

In T1/TG they are inhabitants the player must avoid or confront. We see and hear about the damage they can cause, they are experimented on,[4] and are even kept as pets.

In T2 they are joked about, have become a euphemism, are used as an insult, are feared, and there are several mentions of violence against them. We only ever see mounted trophy heads and an image of a burrick's head painted on a sign hanging outside Crippled Burrick Pub.

In T3 the word "Burrick" has become a euphemistic curse word, burrick meat is consumed, they are still joked about, the Sentient called "The Heart" is also called "The Burrick's Heart Ruby", but we never see a burrick in any form at all.

A Burrick is much more horrific in appearance than it is as an opponent. Its patrolling speed and visual acuity are high and it is a bit difficult to stalk and backstab one. Still it should be fairly easy for most players to circle around the beast and attack it repeatedly with the sword or blackjack from different directions, giving it no chance to use its breath attack. The problem arises when the Burricks come in groups as dodging a great deal of gas clouds at the same time, can be a toilsome experience. As an additional hindrance, the "burpfx" effect is so complex that the game's framerate drops dramatically with each additional belch on screen.

A repeated in-game notion is that the noxious fumes from a Burrick are reputed to be flammable, but that's not an implemented gameplay feature, what with all the open flames and explosive weapons around. Still, Garrett quips about "looking down a Burrick's mouth with a lit match" in the briefing for Framed.