The Broadhead Arrow is a lethal arrow shot with the Bow, that can kill an opponent in one shot. 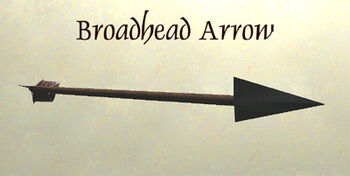 Areas they can be found:

Maximum amount in inventory (TDS only): 30

The broadheads are the most basic method of ranged attack. They are the "normal" arrows. Their most basic and obvious ability is killing from afar, but it is very important how well a player uses them. The circumstances and situation have much more significance with the broadheads than with the other arrows. The Broadhead arrow has a priceless stealth bonus, which is however applied only on enemies that are not alerted. The player can literally kill a foe, both human and not, in just one shot if he has fired a fully pulled arrow from the shadows and hasn't given away their presence yet. This bonus as well as the normal shots, applies equally to the whole body of the targeted enemy, meaning that it's irrelevant if the arrow hits the head or feet. But once a foe is aware of the archer's presence it becomes much harder to finish them. If a foe is only suspicious of a danger or if the player surprises him in front, it will take more arrows to kill him, depending of his type. But if he is running and screaming towards the player, it may take up to 10-15 arrows to do the job. The damage range is big and it's again irrelevant of where the arrow hits. In addition there is difference if the bow if fully pulled or not. This does not concern only the damage but the arrows trajectory, parabola and speed. After all those details, it is needless to say, that the broadhead arrow is very "archery skill" dependent. One should keep in mind that a fully pulled sting provides the most damage and the best arrow trajectory, but it takes some time to do it. This is fine when aiming at a foe from an ambush position, but can be quite uncomfortable when a foe is on the attack at the same time. Indeed when an arrow strikes the enemy he bends in pain which gives the player a second, but this doesn't apply when he is too close or is ready to attack. No arrow type is good for close combat and the broadheads are no difference. So if an enemy has discovered the player, it is good if that player can do enough damage to turn the enemy running before he can close the distance. It would be even better if the player can finish him before he can escape and calls his friends for help.

The higher difficulty levels disallow violence towards humans, so this makes the broadhead arrows less effective when facing human guards. On the other hand this makes them even more valuable against non human opponents. Garrett usually ventures going into areas no other man dares and this is mainly because of the serious population of monstrosities there. Even on Expert Difficulty there is no monster to which the "kill no humans" rule applies. The stealth bonus rule however applies with the same parameters. One can kill with one shot anything unaltered from Spiders to even the mighty Burrick and Craymen. They are surprisingly effective against Fire Elementals. However, stronger creatures like The Trickster's Bugbeasts cannot be wasted this way. Even after a fully pulled shot with nothing giving away the player's presence they'll need a few extra shots. The little spiders on the other hand always die from a single broadhead hit, but it is more difficult to hit them. The undead are an exception to some extent. Stealth Bonus does not apply on the undead and the broadheads don't really damage them. The zombies for instance still get damaged, but only enough to fall down on the ground and rise up again, and after around 10 shots. It is a method of keeping one's distance from them if there are no other means. But it is not very advisable to use broadheads on Haunts and Apparitions, because they are very tough and quite powerful in battle. It is true that one can kill a Haunt with broadheads, but one would need a good deal of broadhead arrows (around 15 to 30) for a single one. It should also be noted that Mechanist Robots and Tree Beasts are immune to Broadhead attacks.

The broadhead arrow's hard head make loud sounds upon impact with surfaces like metal, tile and even brick. When a foe hears that sound he may investigate, therefore leaving the thief time to move in another direction. Taking this into consideration gives the idea of using broadheads as a substitute for noise making arrows. Even more tempting is the fact that they are much cheaper. But the area of sound is smaller with the broadheads and they don't always trigger a response. In addition, when they hit grass or gravel surfaces, they don't really make enough commotion to disturb anybody. In general it is a good idea to, assuming one has broadheads to spare, try hitting a loud surface near enemies before resorting to using a noisemaker.

Another very helpful and sometimes even indispensable use for the broadheads is pushing buttons from distance. Simply aim at the button and shoot. Any type of push and press button will activate whatever it's supposed to if the arrow hits on target. Hitting larger buttons is of course easier than hitting small ones, so aim is important. This is priceless when facing buttons that are out of reach. It is also important to hit the correct button when multiple buttons are gathered near together. For example, to bring something (elevator or ramp) down or up, one must aim for the lower or upper button near it. With little practice a player can call down or up ramps and elevators, activate lamp switches, open button doors or even do something silly like activating the alarm. Incidentally, pushing buttons can be done with other types of arrow, including Fire, Gas, Noisemaker and even Water or Moss Arrows. Broadheads are simply the cheapest and can be found in large quantities.

A less common use for the broadheads is checking the material of distant surfaces. When a player shoot a broadhead at a surface it makes a distinct noise recognizing if it is metal, wood, stone and etc. This can be most useful if a player wants to use a rope arrow, but cannot determine, due to darkness or unfamiliarity with the texture, whether a surface can be penetrated by the arrow or not. In this case a single broadhead can clear the dilemma. Every surface type makes a different noise, but there is a basic rule: usually good surfaces make a blunt and low sound, and bad surfaces make a loud and piercing sound. It may be wise to check when not certain, instead of wasting a more expensive and hard to find rope arrow.

To summarize, the broadhead arrows are quite cheap, versatile and can be found in all sorts of places. If they hit a wooden or any soft surface they the stick to it and can be picked up later for reuse. It is generally hard to run out of broadheads, so don't spare them. However a player would need at least 10 arrows in his quiver for back up situations, so don't get too carried away or neglecting broadheads in the shop. It is not pleasant, when a player thieves around a mission for an hour, without killing anything and then he needs to push a button from distance or make a distraction and he is forced to use more valuable arrows. They have their place! Another rule to remember is considering groups of enemies. If a player is hidden in the shadows well or are on high ground and the foes can't reach them or fire something at them, they should be OK aiming at them. However, the player will be hard pressed to cope with two or more foes running towards them at the same time. Enemies with ranged attack also provide a challenge. A single one can be defeated if shots are timed correctly, so that when he's shooting the player is evading and when he's reloading/recharging the player is shooting. But if they are two or more - run to safety. With those things in mind, the broadheads can give a thief a comfortable distance from the enemy.

All of the rules from the first Thief games apply in Thief: Deadly Shadows as well, with the exception of a few but important details. In Thief 3 the broadheads do cause different damage to the targets when they hit different parts of the body. The head and the torso are most vulnerable to harm and the limbs are less. The stealth bonus also takes that into consideration. A shot to the head is an instant kill to a foe, but a shot to the feet will just get him alerted. To distract someone using a broadhead arrow, three of them shot into a loud surface near the NPC will get him alerted (yellow alert) and investigate. The broadhead can also be shot into a piece of unreachable loot to make it fall to a more reachable position.

The broadhead is an arrow with a wooden shaft and feathered fletching. The head itself is different from the regular sharp head. It is wider and stronger, providing smaller flight path, but causing more damage to the target upon impact. The tail has three fletches like most arrows (except the Fire Arrow), which provides a combination of flight stability and accuracy.

Historically, broadheads were used mainly for hunting. They were expensive and usually not used for practice. They usually had two to four sharp blades that cause massive bleeding in the victim. There are two main types of broadheads used by hunters. One is the fixed-blade, while the other is the mechanical. While the fixed-blade broadhead, which is the one appearing in the game, keeps its blades rigid and unmovable on the broadhead at all times. The mechanical broadhead deploys its blades upon contact with the target, swinging out to wound the target - it has a greater range because it is more streamlined, but has less penetration as it uses some of the kinetic energy in the arrow to deploy its blades.