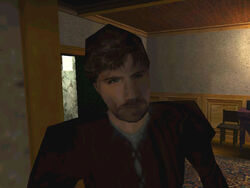 Basso, also known as Basso the Boxman,[1] is a minor character in Thief: The Dark Project and Thief II: The Metal Age. Basso is a convicted arsonist[2], thief, and lock-picking specialist[3].

Basso is first encountered in Thief: The Dark Project after being incarcerated by the Hammerites at Cragscleft Prison. Garrett, visiting the prison on other business, decided to break him out of jail in order to score points with his sister.[4] Basso is unconscious, and has to be lugged out of the prison.

Basso reappears and first speaks in Thief II: The Metal Age, when he requests that Garrett rescue his fiancée, the chambermaid Jenivere, from her master's estate.

Enemies, Creatures and Characters
Retrieved from "https://thief.fandom.com/wiki/Basso?oldid=73904"
Community content is available under CC-BY-SA unless otherwise noted.