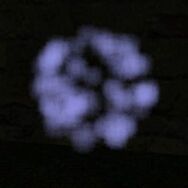 Air Elementals are one of the magical representations of the element of Air. They can only be summoned by Air Mages, as that is the only known way to bring one to existence. There are no records of such elementals existing naturally by their own will, unlike their Fire equivalents. The Air Elementals have a very short life, once they are summoned (less than 15 seconds), and they mainly serve the purpose of guards of the mages that summoned them. They are quick and unlike energy bolt "teardrops" can maneuver themselves around obstacles and follow Garrett. They will self-destruct upon reaching any enemy of the mages, inflicting from 4 to 6 points of damage.

Air elementals are said to communicate to the mage "by extinguishing certain lights in a sequential pattern", although this is never seen in game.[1]

Enemies, Creatures and Characters
Retrieved from "https://thief.fandom.com/wiki/Air_Elemental?oldid=57605"
Community content is available under CC-BY-SA unless otherwise noted.